Well, it's Saturday and I get to go back to work.  We've already had a rain shower - more thunderstorms are supposed to be on the way, though nothing severe.
I went to see my new Optometrist yesterday, she works for the VA.  Very nice.  She seemed somewhat surprised when I told her Kilmore Eye Ass only had me putting drops in one eye.  That explains why the pressure in my left was higher than the pressure in the right.  Also interesting, was that the high pressure in the left eye was not high enough to actually warrant treatment, nor diagnose as being true glaucoma.  Maybe it's a good thing I'm no longer going to Kilmore Eye Ass.  I signed a waver.  They're going to be sending her my medical records.
Looking at the pile of limbs and branches behind my back fence, I have to admit to pondering the purchase of a wood chipper.  Most of the debris is three inches or less, and the wood chips would provide a really good mulch.  There's also the possibility I might be able to use it on any thin Republicans who get too close to the house.

And I guess there's a lot of bipartisan shrieking going on because the Idiot Jerk is caving to the Chinese... you know?  ZTE?  As I said before, you need to keep in mind that both he and Ivanka have trademarks in China and nothing is more important to the Idiot Jerk than those trademarks.
My roses are also beginning to bud and bloom.  I took some pics yesterday out front. 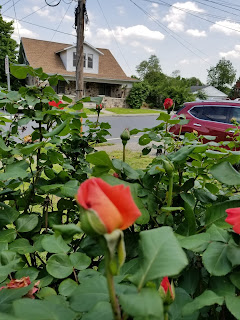 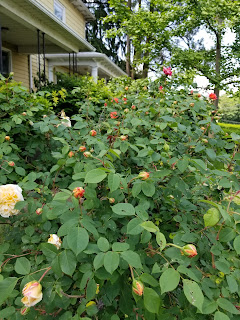