Okay, so we're into Thursday.  Clouds, showers and thunderstorms are in the forecast for today and tonight.  This weather pattern is supposed to continue into next week.  The following week, when I have vacation, things are supposed to be more summer like... you know, sunny and warm.
I read this interesting opinion on the Idiot Jerk in the White House; how he really is terrified of the Mueller investigation.   For the first time in his life he can't just shit away accountability.  He knows he's a scumbag, doesn't care that he's a scumbag, he just wants to tell people what to do.  Rather than demonstrate ethical attributes which earn loyalty, he found it much easier to buy it.  His favorite choice of attack was always the lawsuit.  Small business owners were easy prey.  Except now, that option is no longer available.  When something goes wrong with the economy, his supporters will go for his throat.  He knows this.  He is an asswipe phony who's managed to lie himself into a position where he may be the first American president who goes to prison.  I find that rather exciting.   Well, not that I think that will happen.  As I've said before, he'll run away to Russia first.  That's what cowards always do, and that is one thing you can be certain of, he is a coward.
For the past 2 weeks, ever since Blogger did an update, I've not been getting any notification when someone leaves a comment.  A lot of bloggers have been complaining and evidently Blogger is working on a fix.
So, I went out yesterday and bought a new toy.  A PS4 Pro.  I have been having issues with my Xbox one special edition.  They started with the original controller's inability to stay synced with the console.  After much arguing with Microsoft, they replaced the controller.  Sometimes with a disc in the drive, I needed to disconnect the power cable in order for the console to boot up.  At other times the game will play in what seems to be slow motion.  You should get more than 2 years play time out of a console.   The PS4 Pro gets good reviews and is expected to be around for a number of years (4 or 5) before a new console gets released.  I may no longer be playing games by then.... nah, I'll still be playing. 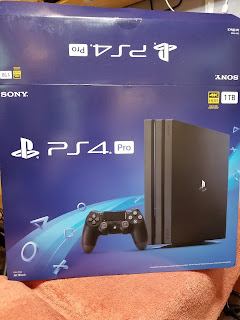 I also have a bit of a problem with Microsoft.  I bought a Surface tablet for my writing and... well, the damn thing is not nearly as versatile as I was expecting.
And the new Bethesda game is..... Fallout 76, which evidently takes place in West Virginia....  Holy Shit!  Coal Country!!  On the Fallout timeline, the story starts in October 2102 - 25 years after a nuclear war devastated the planet, a war initiated by the Chinese, I might add.  More reveals about the game will come in the next 11 days.