The humidity is high - like I am living in a sponge.  Being not warm enough for the Central Air, and not cool enough for the heat, I'm relying on the ceiling fans to keep the air circulating.
Yesterday's ride was only 13.2 miles which is fine.  There was, however a problem with my Suunto Spartan.  While cycling indoors, the Spartan acts as both a timer and a heart rate monitor.  At the end of my ride I press one button to stop the timer and a 2nd to stop the ride.  That didn't happen.  Pressing the first button moved the Spartan into stopwatch mode.  The 'end ride' screen never came up.  Pressing 'end' button did nothing.  Of course I said "oh, Shit."  Plugging the watch into my computer, I ran a diagnostic and got ****error****error**** in bright red letters.  My only option was to do a reset.  All data in my watch would be erased.  No problem.  The only thing I lost was yesterday's ride, which was a bitch.  Sometimes things happen.  You deal with them and move on.
So yesterday was also the one year anniversary of Mueller's investigation.  The Idiot Jerk in the White House called the 'greatest witch hunt in history...' gee, and I thought the Benghazi hearings took that prize.  What's this moron going to do in November when the Liberals and the Centrists take back the House?  And, quite possibly the Senate?  You can bet for the next 6 months those radically conservative Republicans are going to be shoveling as much shit and fake news as they possibly can into the public arena.  And after the elections?  Prepare yourselves for a deluge of shrieking, and wailing, and rending of hair.  They will join their voices in a thunderous chorale of pure hatred as they find themselves hosed into the gutter.
Sometime today, the clouds are going to open up.  Rain is coming.  Supposedly heavy at times.  Enough inches to put us in a flood zone.  Of course, the GOP is already in a flood zone.  Get ready to watch them pull on their floaties. 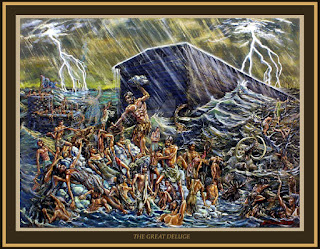 This means business at the store will be slow.  That's to be expected anyway.  Our Memorial Day sale has already started, but the firework bargains don't start shooting off until Thursday.  Surprisingly, I'm off Thursday & Friday.  Optometrist appointment with the VA.
Posted by Dave R at 8:10 AM