To jab or stab?

Tuesday... and the rain is back.  The first thunderstorm came through around 0200.  Today is supposed to be pretty much of a wash out.  Tomorrow the sun is supposed to come back out.  By Thursday things should be dry enough for me to saw, and wack, and bag... and I had been hoping to take the bike out on the road.  We shall have to wait and see.  I'm off Friday, so maybe I'll just save the wacking until then.
I've been pretty much of a slug for the past week.  I've done little more then sporadic rides on the trainer.  Some weight training, but nothing regular.  I'm blaming the weather.  Like right now, while I'm typing this, the air is so thick with humidity you could almost cut it with a butter knife.  The temperature is in the high 60's, so I can't turn on the Central Air.  What most people forget is that this type of weather is normal for Central PA.  Summer and winter aren't bad in the part of the county.  One gets hot (occasionally) and one gets cold and snowy (occasionally), it's spring and fall that are the shits.
So, I guess one of the messages the DNC has settled on for the mid-term elections is "corruption."  There are so many choices, though, so many choices.  One thing they do need to be careful of is shrieking overkill.  This is a lesson so apparent in what I'll call 'recent history.'  You need look no farther back than Bill Clinton's re-election to see what I'm talking about.  Sure, Democrats loved him.  The Dot.com money was starting to flow in.  Those things helped, but what really worked in his favor was the Republican Overkill Machine.  The loud, endless attacks by Republicans worked against them.  The American Voters punished them by re-electing the source of their hatred.  We meed to avoid that pitfall, that tar trap which will suck us under.  The last thing in the world we want is for people to begin feeling sorry for the Idiot Jerk and his minions.  This means attacks against them must be varied and loud enough to be heard.  Constant little pinpricks is what we need.  Little jabs all over the Republican body.  Don't copy their failed strategy of overkill.
Of course, they're still using that same, tired old strategy.  The Idiot Jerk in the White House is blindly stabbing away at the truth.  And his supporters love that shit.  They are a minority. 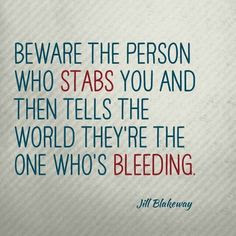 Believe me when I tell you, a jab is better than a stab when it comes to building up long term anger.  The fool who blindly stabs very rarely does little more than superficial damage.