So, I see Barry Manilow finally came out of the closet... at 73.  The LA Times had a silly headline about how he was worried he'd disappoint his fans, but in the end he 'made it.'  Give me a break!  I really get tired of aging pop stars and celebrities (like Richard Chamberlain) who come out in their later years and use that terrible excuse.  They're fans.  As though they suffered in silence to keep their fans happy.  The truth is he didn't just stay in the closet, he made homophobic comments.  And those fan's loyalty is pretty cheap if they're going to desert because of your orientation.  Don't these people know it would be much better if they were honest, admit to being terribly insecure individuals who are simply terrified of publicly saying "I'm gay."  I'd rather that than this 'I'm old and they're old, so it doesn't really make any difference now,' excuse.
And then there's Steve'o, and not the one who used a staple gun on himself, though this Steve'o's just as crazy.  You know, the Alt-Right Svengali who managed to have himself declared the Idiot's 'right hand man.'  Didn't take long for the turf between those two to get muddy, did it?  All sorts of shit hitting that fan, like this from Breitbart.  If Steve'o thought he was going to be the Brain Behind the Idiot, he was wrong, and while he's not yet cleaning the White House shitters, that move might be just around the corner.  And you can bet this is fueling the flames of hatred in the America Haters who just 'love' Breitbart.
And then there's Andromeda... 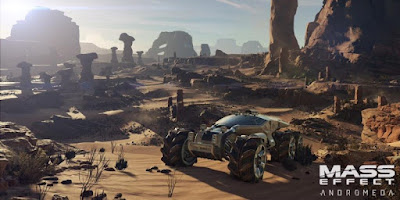 Reviews have not been... kind.  And, the game does have some issues.  In fact, Andromeda has so many issues there was an update on day one, and another patch is coming today, 16 days after it was released.  If you go the Mass Effect Andromeda website there is a whole laundry list of things today's patch is supposed to start to fix, including more same sex relationships.  I'm not worried, things will get fixed at Bioware's expense, of course the game I'm playing now will not be the game I would be playing 6 months from now.  That's not a very good thing to have to say.
Posted by Dave R at 8:38 AM