And the next War Zone will be?

Okay, so this is my 2nd day off in a row and the weather's just fine.  Took the dogs to the park this AM, they loved it!  They always do!
I'm also working getting my kitchen repainted.  There's a 7 foot section under the cabinets that I will probably be tiling - another new adventure.
In case anybody is wondering, Patty's Mom is still hanging in there and Patty's talking about going to see "Guardians of the Galaxy, Vol II," so life goes on.
I see that the government is not going to shut down... at least for another week.  I guess the Idiot needs to say that he achieved something... anything in his first 100 days.  Of course, he's also said that we may become involved in a major conflict in North Korea.  Evidently he doesn't know we tried that once before and pretty much failed.  That's why there is a North Korea and a South Korea.  Things didn't go well then... and the Conservatives, never having learned anything, will probably get us into something that's not going to go well.  And they don't care.  They do like to claim they are the party of National Security however, don't they... well, they stopped saying that for a while after 9/11 because... well, because of 9/11.  I'm just curious as to what their excuse will be?  Weapons of Mass Destruction?  Well, at least this time we know that statement is true.  We won't have to watch any desperate fingers pointing at bombed out baby formula factories claiming they were something they weren't.
And, of course, we'll have to send troops.  That's not going to go over well with the Idiot's supporters.  As long as their own flesh and blood doesn't have to go off and fight, they're fine.  That's what killed 'W's approval rating.  Their children were coming back missing arms and legs and sanity.  Remember how the conservatives didn't want any photographs of Flag draped coffins?  Well, it's going to be more of the same.  Why is it the Rich have no problems sending poor and middle class children off to die?  They rarely if ever send their own because, well, they might die. 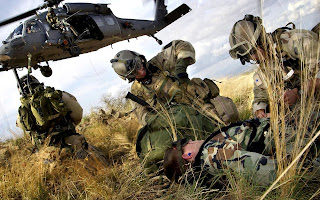 That's something Barron's never going to have to do, is it?  Sling a rifle over his shoulder, hunker down in a jungle with tracer bullets flying around him, or have his teeth rattled by the concussion of a grenade going off too close for safety.  This is why the Idiot doesn't understand and doesn't even care.  His spawn are safe.