So, I got up around 5 this AM and have spent much of the morning putzing around, doing little chores, cleaning up the yard (big dogs = not a small task).
I've been checking to see if the air strike in Syria did anything to improve the Idiot's approval ratings...   Can't find a single thing.  I saw Rubio was on some talk show huffing and puffing about Assad and ISIS, but that doesn't surprise me, I've always thought he was pretty much of a huffer.
And, of course, your seeing blow back on social media because runways weren't targeted.  I wonder if that's where the Russians park their planes... and the Syrians as well.  I did post a comment in Facebook this bit of Idiot Bluster, that a "Crime against Humanity" was only worth 59 Tomahawk missiles and it just happened to coincide with a dismal jobs report.  The fact that both happened on Friday is even more... shall we say interesting.  Keep in mind that those attempting to govern are Republicans, and they have never been too creative.
Of course, right after this bit of foo foo retaliation every one who is any one in the media was asking how this was going to change the Idiot's approach to Syria.  If they'd only waited until yesterday morning, they'd have had their answer.  Nothing's changed.  At all.  This is almost like watching Star Wars, with Putin playing the part of the Evil Emperor and the Idiot desperately wanting to be Darth Vader.  He wants the Force to be with him... now ain't that funny. 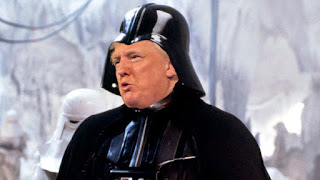 Anyway, it's a beautiful day outside, the temperature is supposed to balmy and... I have to go to work.  When the weather's this nice I open both doors so the dogs can have full run, and they love it.  Smart move, because when I leave to put in my 8 hours they're going to be tuckered out.