How the world turns

Dearie Me... I slept in again this morning.  Not because I stayed up late.  Nope.  Actually, there are 2 reasons.  The most obvious is that my alarm is not set for Wednesday morning for some reason.  Number 2 is doggy bladders.  Biggie out off the bed twice before finally deciding he needed to go potty outside... at 1245.  Then it was Lily's turn.  At 0230 I was standing down by the back door waiting for her to do her after midnight pee run.  And that little lady took her time.  Long enough for me to eat a slice of cheese.

I'm set up to get a physical down at the Lebanon VA on 4/30 with Dr. Haverstock.  I'm staying with the Optometrist I have at the VA in Harrisburg, but all my other health care, which isn't much to speak of, is going to Lebanon.  I'm fine with that.  I grew up in Lebanon.  This place is big!  The building Center Left with the white roof is their YMCA - that's where I was vaccinated.  The building Top Center with the white roof is where I had my hernia surgery.  My new doctor is going to be in the large building in the Center, on the 5th floor. 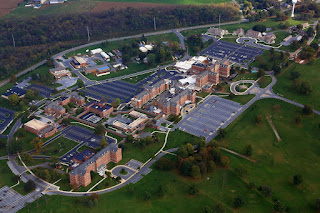 And what a great day we had in America yesterday.  The hair stood up on my arms when I heard the Jury had reached a verdict.  Of course there was trepidation.  So many times before juries have sided with the police.  Yesterday was different.  When the verdict was announced I will admit a tear ran down my cheek.  And though yesterday's decision was a big step forward, in truth it was only a very small one.  Last evening the white, conservative pundits began raising their voices denying there is racism in this country.  Their fear is growing because they are losing their fight.  Evolution is winning.  It has always won.  This is how the world turns.