So, my alarm went off this morning and I chose to ignore it and sleep a little later.  Sometimes that is nice.  However, I can also see how sleeping late might turn into a bad habit.  When I finally go into partial retirement, I don't want to be one of those people who stays up all night and then sleeps away the day, getting nothing accomplished.  When that happens, you're basically turning into a rock rather than a human, or a troll.

Yesterday much was accomplished, in spite of the constant drizzle.  Bread was baked.  Whole wheat, it's sooooo delicious!  I've eaten half the loaf already.  Can one live by bread alone? 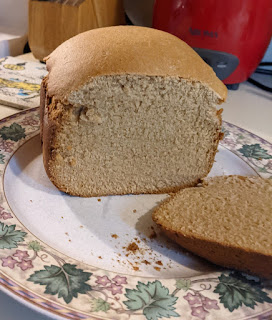 Doing a little research here, so does anyone know what kind of wine would go good with S'mores?
I made Italian pork chops for dinner last evening and they turned out anything but tasty.  I'll pluck the meat for the bones and the dogs will get a treat.
Also, my doctor's appointment is for this afternoon.  After that, I'm going to get in a ride.  It's been a while because my knees have been old age achy.  I'm debating whether I should begin dousing myself with turmeric since it's an anti-inflammatory.
One of the things Uncle Joe brought up in his speech was Trickle Down Economics, that old Reagan lie Republicans have been posturing for years.  Well, after decades of failure, even Conservatives are admitting it doesn't work.  It worked a bit at first because the tax rate for some was around 70%.  However, once the tax rate drops below 54%, it turns into a gift for the rich.  This is a truth Republicans hate.  They want their base to be gullible as hell.
And what about Florida and their voting laws.  One of the definitions of Systemic Racism is to make voting more difficult for those minority groups you don't want voting.  Yep.  White Republicans believe that by making it illegal to give out water, and reducing the number of voting boxes, and make mail-in useless, people of color will stay away from the polls.  This belief among white Republicans proves they zero understanding of people.  They will only eat white bread, saying, "to hell with the wheat, the rye, and the raison."