A Bit About Entertainment

Monday.  The half gallon of ice cream I bought several days ago has been eaten.  Breakfast this morning will be a return to my standard oatmeal.  Healthy eating returns.
Last evening when I got home from work, I found this nestled into the corner of the futon.  Someone large enough and managed to pull it off my sideboard and chew off the top.  The advertising is wrong.  It should read 'irresistible to freshwater fish and 118 lb. boxers.' 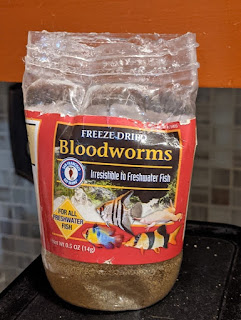 Yesterday was so-so at work.  The rain stopped, but the sun didn't come out and the day remained overcast.  Today looks like a Xerox copy of yesterday.  Tomorrow the temps begin to climb.  Wednesday the thermometer is supposed to reach the upper 80's (F).  The temptation will be high to turn on the Central Air.  Gee... I might even open the windows.
And the Oscars were last night.  The Oscar website is saved as a favorite in my Entertainment file (yes, I'm more than a little organized), so I thought I'd watch a few moments on the big screen gaming computer I have.  Nope.  T'was not to be.  Evidently the ruling body of the Academy have seen fit to give ABC all rights for distribution.  Yep, they no longer stream from their website.  You actually need to have a cable subscription now.  Well, son of a bitch!  I got rid of my local channels because I was tired of spending $250 a year to watch 3 shows.  Instead of watching snippets of the ceremony, I ordered an HD antenna for my TV.  I'd had a cheap one, but got rid of it when I signed up for local channels.  My mistake.
Of course, since I had no interest in sitting by my computer watching updates and highlights of the Oscar ceremony, I did the next bestest thing!  Played Assassin's Creed Valhalla.  I love being a blonde, rugged Viking.  Anyway, this game if produced by a French Company called Ubisoft, and this company, as are many others, is moving into other genres of the entertainment genre.  They have a movie coming out this June called 'Werewolves Within,' which looks like a real hoot.  Here's the trailer:
Posted by Dave R at 6:59 AM