Slept in again on my day off.  Of course, I stayed up watching Star Trek, Discovery.  I think of it as a little treat.  While I like the Star Wars movies, I've always preferred Trekking through my science fiction.  One series grounds itself in science, the other in fantasy.  One is geared towards adults, the other towards a toy buying younger generation.

Yesterday was very busy up until around 3 PM, then things began slowing down.  That's fine with me.  One of my customers shelled out $4000 for new carpet.  She told me, her and husband have used every stimulus check for home improvements.  "It's what we're supposed to doing," she said.  I banked most of mine, but you better believe it's going to be spent eventually.

I also picked up some veggies yesterday, including an eggplant.  The selection was really rather lame.  I ended up with 2 tomato plants, 2 pepper plants (1 hot and 1 sweet) and an eggplant.  There were a hell of a lot of lettuce plants... not my thing.  I'm not a salad kind of guy.  I like them occasionally, but having one every meal is... well, a bit too green for me.

Anne Marie wanted to see my loaf.  Can I have a drum roll, please? 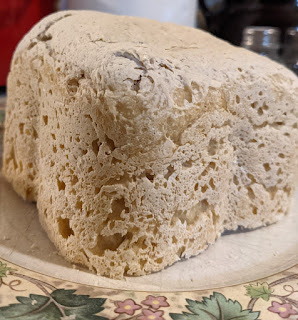 It has a good taste, but I'll be honest, I prefer baguettes rather then loaves, so this will probably the last time I use the maker for baking French bread.  I have the option for using the machine only for mixing, kneading, and letting the bed rise.   At that point, you can shape it into a loaf and bake it in your oven.
And I did get a chortle when I saw that Republicans are looking forward to the 2022 elections.  They see  themselves has winning back both the House and the Senate because of Immigration and the soaring deficit.  They are so delusional.  Almost 49% of the voters in this country are registered Democrat.  Because of January 6, many Republicans will sit out the next election because they're disgusted with the direction of the party.  These are facts they totally ignore.  Their fatal flaw is only believing what they want to believe.  Only a few will learn when they're proven wrong, which is good news for Centrists.