And today is Sunday, and it's raining, a slow drizzle.  This is, I believe, the forecast for today.  Business in the flooring department should be... rather uneventful.  However, even in the rain, the Garden Department is going to be buzzing.  Tis the season of mulch.  And patio furniture.  And grills, both types, gas and charcoal.  My Mom, for some reason, pronounced charcoal as sharcoal.  Maybe she thought it sophisticated.  I will never know.

For those interested, I had a bowl of peanut butter cup ice cream for breakfast.  Delicious.  I didn't have to cook.  I'm going through one of my high caloric junk food phases.  They happen from time to time.  Thoughts of calories, and fat percentages, and carbs go flying out the window.  And, unlike some, I never regret these times.  I also don't mind the exercise which will be needed to work off the damages done.

The Oscars are tonight.  I might watch some of the show.  I saw so few movies last year, and so I don't have my normal interest.  This is the year of the small film.  Dramas.  I'm not a big drama person, and I will admit I don't understand why some are drawn to the genre.  Let's be honest.  This past year has been overflowing with drama, why on earth would you want to immerse yourself in more?  Do some need to prove that fictional characters have it worse then them?  Or is it for the same reason my Mom said sharcoal rather then charcoal.

Here's one of my tulips to brighten your day! 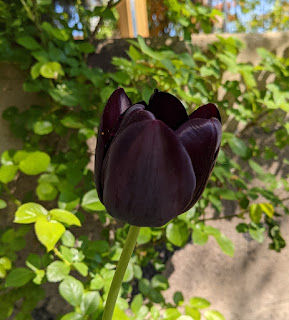 Both India and Brazil and struggling through Covid.  What I find interesting is that there are still quite a number of Americans who either haven't had the disease or haven't been immunized yet.  In fact, there are still enough unvaccinated Americans to overwhelm the hospitals should they start getting sick.  True, we may know how to handle the symptoms better, and more are surviving, but that doesn't mean the death toll can begin to climb again.  Most of the unvaccinated are anti-vaxers and Conservatives still believing the lies of Loser #45.  Eventually, they will get sick.  There's no stopping it.  More will die.  That's their choice.  Perhaps they're just more interested in bringing more drama into their lives.