I accomplished much yesterday.  Hey, I even got my lawn mowed!  During a drizzle!  Took an 11.83 mile ride in Bavaria - that was ok, the first half was downhill which does nothing for strengthening legs or burning calories.

Worked on the aquarium.  I cut back the plants.  They're growing like pizazz!  If I'm not careful, they will fill up the tank.  Here's what it looks like now.  The angelfish are over 4 inches from top to bottom. 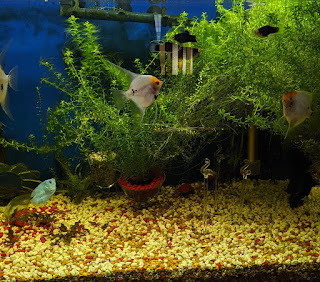 I sent an email to the VA yesterday morning in which I politely detailed my disappointment with their performance.  Around 1100 I received a phone call from a scheduler to make an appointment.  At this point, my shoulder doesn't feel that bad, so I declined.  However, she did give me her extension so if ever "this sort of breakdown in communications" happens again, I can reach out to her.  I'm wondering if this breakdown is rather common.
Damn, I have a mosquito bite on my left elbow and it itches like hell.

Oh, and I don't know if any of you saw, but China says they are now our equals.  If this is true, you can blame the Republicans. In case you haven't noticed, the only thing they've been concerned about for years has been to push their social conservativism into every American home.  Science is important.  Covid comes along and they turned away from science.  They have been more concerned with putting the 10 Commandments back into classrooms, then they have of scientific advancement.  Now we are in a struggle to keep from falling behind.

Also, sanctions against Russia were announced this morning.  I suspect they're not happy.  Uncle Joe's not going to kiss Putin's ass like Loser #45.  He knows a dictator when he sees one.

And finally... legislation has been introduced in both the House and Senate to increase the number of judges on the Supreme Court to 13.  It'll may never happen.  But what it does do is send a clear and concise message to the court.   If you try and change a largely, centrist country conservative to satisfy your on personal beliefs, we will change you.  There must be balance.