Well, it's Saturday and the temperature will hit the mid 80's (F) again, and I decided to take the day off from work.  That's right, I called off.  This will give me 5 days off in a row.  Very nice.  I've had a lot of sales this past week, so I'll probably hit 200% of my goal, which should make everybody happy.
I saw this AM that we shot missiles at Syria.  This is the 2nd time we've shot missiles at that country.  The first time the Idiot Jerk in the White House called the Russians to let them know in advance... and of course Syria is a close ally of Russia.  This time the Idiot Jerk Tweeted up a storm on how we were going to fire missiles.  Stupid things like "get ready, here they come."  Ooops,  Let's make sure they have enough time to move their war toys out of the target zone.  Now the Idiot Jerk is crowing "mission accomplished."  Excuse me, someone with at least an average IQ should tell him this was a mission failure.
And I watched some of "Lost in Space" last evening.  I like it.  There are a lot of references to the original series, including the end music.  Dr. Smith is... really bad.  For those who don't know, or who don't remember, Dr. Smith was really bad for the first season, when the series was in black and white.  In fact, that whole season the show's focus was much more dramatic.  It wasn't until the second season that Smith became a caricature.  The Netfilx reboot is much more like the first season.  Let's hope it stays that way. 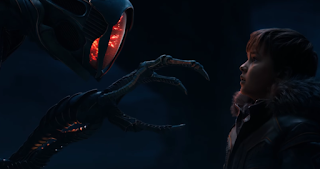 The only thing I didn't understand was the chicken.  So, if anybody knows how a chicken got on one of the Saturn space ships, please let me know. 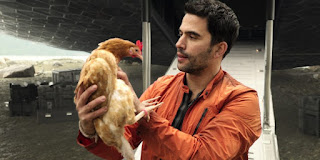 And because today's so nice, the back door is standing open so the dogs can run in and out.  They will be sleeping well this evening.
Posted by Dave R at 10:15 AM