Coordinating your Tops and Bottoms

Today's Wednesday and... my weekend is over... for a day.  I'm off again tomorrow.  This is okay.  Today is going to be crappy, shitty, rainy.  Tomorrow?  Not so bad.  If the weather is fine enough, I'll take the Synapse out on the road.  If I do, I want all of you fashion mavens out there to rest assured my Tops and Bottoms are covered.  Stylish coordination between the two is almost my middle name.  You see, both my cycling shoes and my helmet are made by the same company, Giro.  And, for those of you who don't know, my most favorite color in the whole world is red, which is why I bought the helmet.  I had 3 color choices for shoes:  Black, White, and Black and Red, so I went with the Black and Red.  Now while the Red in the helmet is incestuously close to the Red in the shoe, they're not a precise match.  But you can believe me when I tell you that when I'm wearing my tight, spandex shorts no one is going to notice the discrepancy. 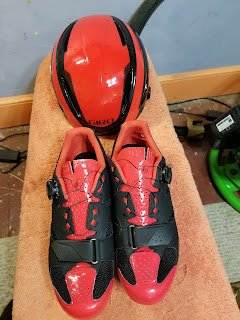 Anyway, there was a special election in Arizona yesterday.  In a heavily Republican District, a district which the Idiot Jerk won by 21%, the race was tight.  As expected, the GOP candidate did win, but only by a 5%.  So, what happened to the other 16%?  The Trumplodyte supporters who threw away their votes to the Idiot Jerk?  Stayed home?  Suffering from 'buyer's remorse?'  You have to remember that Arizona is the state that gave us the very white, very conservative, crazy Jan Brewer.  The candidate who won is a former state senator, her Democratic opponent was a first time candidate.  That should give the GOP reason to worry, having a new kid on the block get so very, very close.  This almost a really big Ooops for them, especially since they flooded the state with Republican $$$.
This is a case when the political Tops and Bottoms are really, really close.
Posted by Dave R at 8:41 AM