Well... we had some snow yesterday... and it hasn't melted away yet, most likely because the temp is hovering around 33 (F).  Isn't it a good thing I wasn't planning on going for a bike ride.
Barbara Bush has died, as if you hadn't heard.  She was 92; that's beyond elderly.  She was married to George H, a one term president who started off as a Democrat...  He had problems keeping his head above water while in the White House.  She also gave birth to George W, the 2nd worst president in American History.  The son she most desperately wanted to see in the White House was Jeb, unfortunately for him W blew that possibility to smithereens.
Right now the Idiot Jerk in the White House obviously has targeted in on W's 2nd Worst President position.  I can say this because his approval rating continues to slide downward.  At no time, since they've been recording approval ratings, has any president been this low 15 months into his presidency.  This, in a rather bizarre twist, should actually please the Idiot Jerk since he's always wanted to great at something.  He is... at being a scumbag.  Everyday his disapproval ratings make the record books and the good news, for him at least, is that they keep going down.
And today, being my last day off, will most likely be busy.  I want to get two coats of paint on the dining room walls.  Pictures tomorrow.  The color is Juniper Berries - which is a lot of Forest Green with a dabble of Sky Blue.  That explains a lot, doesn't it?
And rather than do the dishes by hand, I'm going to load them into the dishwasher.  Yes, I have one of those.  I like to run it every two or three weeks to make sure it still works.
Anyway, I was looking for a graphic on the Idiot's approval rating and found this - on the Faux News Twitter feed - which is surprising.  The only thing they got wrong was his disapproval rating which they list as 56% - Gallup shows it at 59%. 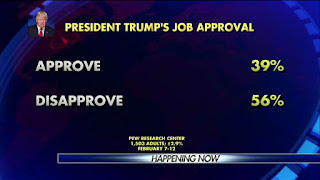 I think W dropped down to 28% when the stock market fell apart.  The Idiot Jerk may get that low without the crash - now wouldn't that be something for the record books?