What a difference a day can make.  Yesterday the temp hit 86 (F) and I turned on the ceiling fans, every one in the house.  We had a balmy, summer day right in the middle of spring.  I'm sure the mulch pit at the store was freaking busy.  Just about everybody buys mulch this time of year.  Today, however, the temp is going to hover around 48 (F) and there is a fine, misty rain which worsen until we have downpours later this evening.  In fact, the next 3 days are supposed to be shitty.  Wednesday, though, is forecast to be nice.  If this happens to be the case, I may take my new bike out on the road!
The Itoh peonies were planted south of Little Stonehenge (my description) and have been properly caged.  Never let your peonies run free! 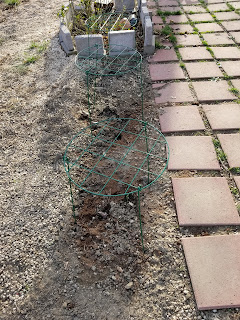 I saw an interesting opinion this AM on Democrats using "impeachment" of the Idiot Jerk as a means of getting elected in the coming Blue Wave.  While author illustrated well the difficulties of impeachment, there is a greater lesson to be learned:  Don't Beat a Dead Horse.  The Republicans have never, ever learned this lesson which is why the Benghazi hearings seemed to run for an eternity.  The only people that waste of American tax dollars connected with were those already going voting for the Idiot Jerk in the White House.  They changed no opinions, yet those crazies on the right could not stop beating that dead horse.  The same thing with the Clinton email scandal.  The only ones angered about that were the ones who would vote Republican even if Stalin were on the ballot.  The only way to get this loser out of the White House is to make his life difficult.  Don't threaten him with impeachment... go after his finances.  Making his attorneys squirm is the key.  The loyalty the Idiot Jerk demands has always been purchased.  Put a better offer on the table and that loyalty will disappear.  This needs to be the difference between Democrats, Centrists, and Independents when dealing with Republicans.  They see an opportunity and pick up a club, when we see an opportunity we need to make a better offer.  We need to learn our lessons well.
Posted by Dave R at 8:38 AM