Well, it's Thursday and I get to go back to work... for 4 days, and then I'm off for 2, back for 1 and then off again.  The following week's schedule is shit since I don't have any consecutive days off, however in 3 weeks I will have 3 days off in a row.  I guess that makes up for it.
The dining room walls have been painted.  Juniper Berries is much bluer than I was anticipating.  This turned out to be a 3 day project, 1 day for stripping, 1 for patching, sanding and priming, and the third to put on 2 coats of paint.  That's right, I always put on 2 coats of paint.  I'm not a big fan of the single coat coverage paint that's out there.  For one thing, I always tend to miss a couple of spots on the first go through, or I don't apply the paint thick enough.  The 2nd coat doesn't take that long, and personally, I think the finish is better.  Once I have everything hung back on the walls I include pictures.
I went to see my Mom yesterday.  This is always an interesting experience.  Dementia, you know?  I found her sitting in the lobby without her glasses.  She told me "they told me to sit here and I left my glasses in my room."  When I asked who told her to wait there she said "I don't know."  She seems to be stuck in the past, about 50 years ago, since those are the memories which come up in the conversation.  She knows they're in the past, but doesn't know how far back she's going when she talks about Rusty.  Rusty was an Irish Setter, and her most favorite dog in the world.  She will say "I wonder how he's doing."  We don't tell her he died half a century ago; that makes her cry.
Evidently Melanoma is having a birthday.  Just what do you get a Trophy Wife, especially one contracted to the Idiot Jerk in the White House?  A 'Get out of Jail Free' card?'
And I was reading how things are really beginning to look bleak for the GOP in November.  So many people retiring, such high disapproval ratings, and fundraising that's somewhat lackluster.  There was a cautionary edge to the article, though, saying it's "too early to call the election a blue wave," evidently they can't say it's a blue wave until the election is upon us.  Instead they're going to say things like "there might be," and "the possibility exists," and "voters are much more appreciative of the Democrats."  And it's only 6 months away. 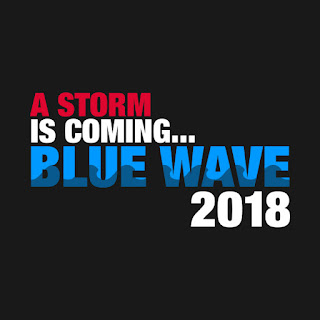 I wonder how many more Republicans will abandon ship before the truth hits home?