Well, it's Tuesday, March 20, 2018... the first Vernal Equinox (first day of spring), well, not until 12:15 PM this afternoon... and we're under a Winter Storm Warning.  Isn't that nice?  I'm off today and tomorrow and the forecasters are calling for up to 10" inches... of snow.  Tonight the temperature is supposed to drop below freezing - that means it'll lay.  Free Cardio!  I'm off today and tomorrow so this temporary snowfall doesn't really effect me too much.  Well, maybe a little.  I was supposed to go to the movies this evening, that will probably be put on hold until Sunday.
And what about Cambridge Analytica?  This is just more proof that the Idiot Jerk in the White House is truly reprehensible.  What's actually rather sad for both he and the GOP is that with all the help they got from the Russians, Wikileaks, and now Cambridge Analytica, they could only get an Electoral College win; they lost the popular vote.  They are one entity.  The Republicans are going to let him do what ever he wants to do since objecting, or trying to control him would be admitting that they made a terrible mistake.  They would rather shoot themselves in the head first... which is what they're going to do.  Or, perhaps that's their plan... let him fire Mueller, create a constitutional crisis, and have the American People wipe that shit stain out of the White House.  That sounds more like them, you know?  Place the blame somewhere else and try to pass as much of their agenda as possible, get as many conservative appointments approved, before We The People take matters into our own hands.  But then Republicans have always been dumb fucks.
Anyway, I want to rush out to my neighborhood Giant before the snow starts - Bran Muffins are on the cooking agenda for this afternoon and I need brown sugar.
As for tomorrow?  Well, this might be me shoveling snow. 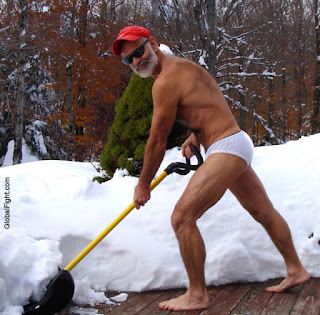