It's Wednesday... and I don't work, which is fine with me.
The agenda for today is overloaded: breakfast with my brother, grocery shopping, a bike ride, and stripping (wallpaper).  Notice I included (wallpaper) to dispel any visions of sugar plums dancing in your heads.
For those interested, the gel riding shorts I bought at Dick's are far more comfortable than the ones I bought from Baleaf... so, since I have a coupon from Dick's I'll go and buy another pair this afternoon.
Also, another bit of news from the western part of the great state of Pennsylvania.  Evidently there's been a bit of an upset.  The reprehensible Republican, Rick Saccone, is writhing with contempt, because the moderate Democrat has gotten the majority of votes.  For Saccone, this was supposed to be a sure thing.  The district was overwhelmingly conservative, and the Idiot Jerk had won it by 19% - 20% during the 2016 election.  Yet Conor Lamb is leading Saccone by at 641 votes, and that gap continues to widen.  News organizations are now beginning to call the election, Lamb's favor.  As might be expected, Saccone has said that his "legal team" is already on it, looking for a way to steal back the election. 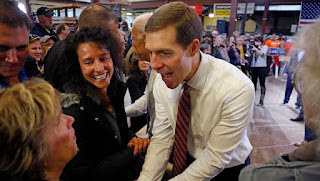 Even Fox News, in an article that seems surprisingly neutral, appears to concede.  I liked the bit where they note that Lamb and Saccone may "face off again in November," but only maybe since the state Supreme Court ruled that Republican gerrymandering of the state was unconstitutional.
The wave continues to grow.
Posted by Dave R at 6:53 AM