Well, it snowed yesterday.  I got 10 inches.  Most of my neighbors went out and shoveled before it had stopped falling... not me.  My sidewalk and driveway were cleared off this morning.  Today's free weight day and shoveling snow is a great way to get some free cardio as well as a nice warm-up.  This means I'm typing this in between sets of hammer curls.
Yesterday I also rode the Concord route again.  The Rouvy app I have is linked to my Strava account.  Strava is an app that tracks both runners and cyclists.  To my surprise, I got a "thumbs up."  No one has ever acknowledge a ride before, so I checked out the individual.  It was this chick.  I looked up her profile.  So far she's run a little over 33 miles this year.  In her most recent photo (there was only one) the camera was pointed directly at her ass.... and all she was wearing was some sort of leather harness.  She probably just saw the Concord ride and thought she might drum up some business.  Now, why couldn't that have been a Chris Hemsworth look alike?
And, of course, now we know that the Austin bomber was a seriously conflicted young man.  He was a conflicted young man who was home schooled by a family that "prayed a lot."  Raising children is a complicated process.  His conflict did not just start four weeks ago, he's been suffering for a long time.  Perhaps if his parents had spent less time praying and more time parenting two people would not be dead.  I have no doubts that when it comes to pointing the finger of responsibility his parents will direct it at Satan.  Isn't that always their answer.  They will never understand those deaths now hang on their shoulders.  In their minds they did the right things.  They turned to Jesus.  They expected Him to be a better parent than they were.
And yesterday, with the snow falling, the dogs would go out... then they'd come in... and then they'd go out again.  Every time they came in I dried them off with a big, fluffy, green towel.  They loved it.  Any way, I got to thinking that I'd never taken a selfie with them and thought yesterday would be good time.  What a disaster.  They're both hams.  They'll be perfectly quiet... until the camera comes out, then they never stop moving.  I finally got Seig on the sofa, and finally got him to kind of stay still, and just as I snapped the picture, he gave me  big kiss. 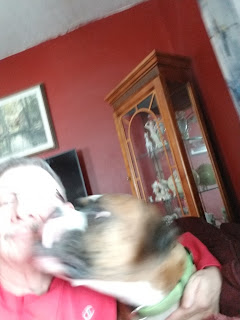 One rule to keep in mind, if you ever get that close to Biggie.... keep your mouth closed.
Posted by Dave R at 8:48 AM