Ah, Monday, my 5th day in a row.  Isn't it amazing how fast time flies.
I yelled at my boss yesterday - not my store manager boss, my department supervisor boss.  He has a bad habit of disappearing.  He's a nice guy... with some aging issues.  He's 47 and totally not dealing with aging.  He divorced his wife, pretty much stopped talking to his 4 kids, and got himself a girlfriend 21 years younger than himself.  He also has other issues compounding this problem.  Saturday he'd told me that he'd needed to take off work 3 times for mental stress, and that once he'd been hospitalized for a week for dementia.  That's right, and he managed to get himself into a management position.  Yesterday, the department was starting to get busy and he was nowhere to be found.  So, I went searching, and found him texting his girlfriend in the 'kitchen design' department.  I told him he was needed in the department.  And he said, "oh, I think you can handle it."  And I said, "your thinking doesn't count when you brag about being mentally ill, we need you in the department now."  This is life.  He went to the department.  What can I say.  He makes jewelry out of bicycle chains so I'd say that somewhere in his path he took the wrong career path.
This morning's ride took me up to the Boston area, 9.8 miles, and I ended up near Concord which was interesting since the last time I was there I was playing Fallout 4, battling super mutant and ghouls.  It's in Concord that you get your first set of power armor and have to kill your first Deathclaw. 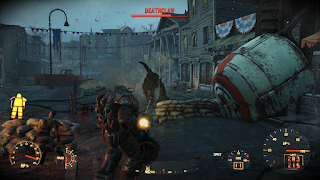 Of course, that's a game.  It's not real, so there's not a lot of accountability.  That's something some people will never understand.
Posted by Dave R at 8:56 AM