Well, here it is Thursday and I'm supposed to go back to work today, however... my stomach's a bit cranky... and it's not because I have to work.  There's some sort of short lived virus going around, so that might possibly be the cause.  Anyway, I haven't decided if I'm going in or not.
I went to see "Black Panther" last evening.  I liked it, a lot.  While wearing the trappings of a Marvel Comic film, like "Captain America - Civil War," the human drama at the heart of the story is what makes this movie great.  Chadwick Boseman is very good as the king who realizes change is essential, whose moments with his spiritual father sting with the rejection of the old ways.  Michael B. Jordan is also very good as the successful, CIA trained mercenary, who has lost himself in the angry, resentful chip upon his shoulder.  This is, in a way, the story of a number of black Americans, some who jump at the chance to take the reins, and others who expect to be driven, those who challenge, and those who blame. 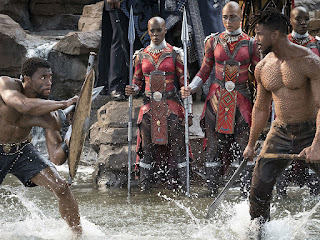 And then there's the Idiot Jerk in the White House who, yesterday, shit all over gun control.  The gun lobby is calling him names while liberals are saying he's making great strides - I call bullshit.  He's done this before on immigration, played both sides because... well, I guess in his mind he's deal maker.  Nothing happened.  Immigration is still a shit storm.  The same thing will happen with gun control, which will amount to nothing.  What ever gun control we get will be the result of retailers: first Dick's, and now Walmart, setting their own restrictions on gun sales.
Also, for those who didn't see, Putin, the Idiot Jerk's preferred BFF, shit out some sort of comment about Russia now having an ICBM which makes all defense systems "meaningless."  Of course, the sack of shit in the White House will no doubt splutter out something stupid because... well, that's why Putin wanted him there, to be a Russkie stooge.  The fool Social Conservatives love so dearly to totally inept at dealing with world issues.
Posted by Dave R at 7:59 AM