Okay, so there are these 2 associates I work with ( well, not directly, but in the same building) who are rabid supporters of the Idiot Jerk in the White House.  Both claim to be Christians....  One is a member of the Branch sect (you know, the same crazy group as David Koresh), and the other is... well, he's a nice guy, but he's definitely gone around the bend with a different sect of Evangelicalism (he claims Catholics are Phony Christians).  Yesterday they were in the back aisle complaining about the... Democrats.  And I had to smile.  Their anger puts an ugly brand upon their beliefs, one that they use their own hatred to justify.  They have specialized their own perversion of Believing to the point where normal can only exist if it's an extreme.  This is why they'll fail.  They're already bitter, the failure of the Idiot Jerk will only entrench them farther outside the circle of acceptable behavior.  This is how evolution happens.  We are actually watching survival of the fittest, and the strongest, and that which is most adaptable.  These people are not making a lot of babies.  Ooops.
Anyway, today is Thursday.  This is my 4th day at work.  I looked at the new schedule and my vacation requests have been approved, and... in two weeks I have 4 days off in a row.  I'm hoping the temperature warms up enough outside to actually go for a ride on the new bike.  And, for the first time since I started riding bike again, 14 years ago, I'm thinking of buying myself some cycling shoes.  I was thinking of buying Pearl Izumi, mostly because I like the name, but the Louis Garneau Copals have really solid and positive feedback.  Besides, the Francophile in me sees the name Louis Garneau and wilts.  Mon Dieu! Je n'a pas du choisir. 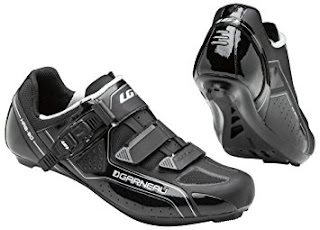 They also come in red... one of my favorite colors, but damn it, they're shiny.  Now, I don't know about you, but I get a really bad feeling when it comes to wearing shiny shoes.  To me shiny = patent leather.  I can see the Idiot Jerk in the White House wearing patent leather shoes, using them like mirrors so he can see up skirts.  That does sound about his level, doesn't it?
Posted by Dave R at 8:02 AM