Well, I get to go back to work today - for 5 days in a row.  I'm not excited.  Not one bit.  But these things happen.
Supposedly the Idiot Jerk is going to kick out several Russian diplomats today.  He no doubt approval from his buddy Vlad before doing so - you know, to give the appearance of legitimacy.  I suspect the Idiot Jerk's been told that if he goes too far Putin will throw his ass under the bus, or in front of a bus, or maybe he'll just leak the golden shower video tapes.  Now that's something we all wouldn't want to see, is it?
This AM I also managed to get 5 miles in on the bike.  Yesterday there was a Rouvy update and I had connectivity issues, my Cyclops Magnus kept losing it's connection.  This morning that problem appears to have been fixed.
Oh, and Devin Nunes, that Robo Republican from California is apparently have election issues.  He's being challenged... and it seems that his supreme loyalty to that pro-Russian, the Idiot Jerk, is hurting him.  Don't you think the part where they report the Idiot Jerk carrying Nune's district by 10% funny?  I think the Idiot Jerk carried Conor Lamb's district by 16%... or maybe it was a bit more.  Well, what do you expect, the GOP is the minority party.  I keep hoping to hear  Nune's say something like "I'll lose this election when pigs fly."
And, speaking of flying pigs - the dogs got a new toy... or, perhaps I should new toys:  Flying pigs! 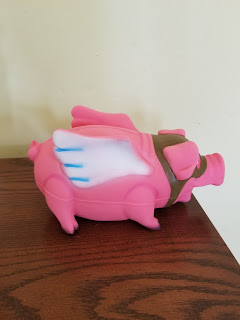 They make a farting sound when squeezed.  Each dog got one.  With two of them going at the same time, yesterday afternoon erupted like a flatus festival.  Of course, Seig broke his by pulling out the farter.  I made a temporary fix by shoving it back in... to no avail.  He pulled that damn farter out again.  Now, Lily's pig farts and his just makes a waffling sound.  It wouldn't surprise me if Devin Nunes sounds a lot like Seig's pig, running around making waffling sounds as he loses his bid for re-election.  Waffle, waffle.  Waffle, waffle.
Posted by Dave R at 8:11 AM