Well, it's Wednesday and it's still snowing.... still.  The dogs are loving it.  They run around outside and when they come in I drive them off with a big, green fluffy towel.  They love that, too.
"Vertigo" is playing at my local AMC this evening - I'd like to go but probably will skip the show.  Not because of the snow, more because the last time I watched it I found it uncomfortably creepy.  Jimmie Stewart stalking Kim Novak while mentally unraveling.  The way he dresses her up like the dead Madelaine, where she's just a shadow of what he's looking for.

And Hitchcock lit that scene in squeamish green, a favorite color of his in this film.  "Vertigo" is considered his masterpiece, and many consider it the best film ever made.  He forces your eyes to move, to focus on the specifics he wants you to see.  Look at how he frames Kim Novak over, and over, and over again. 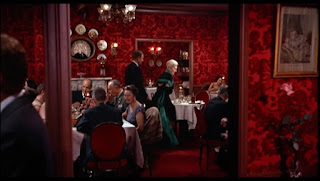 Anyway, the Idiot Jerk in the White House congratulate the dictator of Russia for winning another phony election.  And, of course, Sarah Scumbag tried to put some sort of spin on it, as did his supporters.  Interestingly enough, only a very small percentage of Americans feel he's leading the country in the right direction.  And that number seems to be sliding downward.  Oh, and I see that an ex-playboy bunny is getting in on the lawsuit action - another one he had to pay to keep her mouth shut.  Oh, my.  His reprehensibility just seems to be growing, and growing.  And evidently people are beginning to quit Faux News, calling the network a "propaganda machine" for the Idiot Jerk.  Oh, dear me.  This is sooooo uncomfortably funny.
Posted by Dave R at 7:55 AM