Well, here is is Thursday and this is going to be a Recovery Day.  Everybody keeps telling me to take it easy and since I did cardio on Tuesday and Cycling on Wednesday, I've decided that today I'm going to take it easy.  Work yesterday went fine, though I realized around 5 hours into my shift I should have brought some Advil, so, guess what's getting packed with my lunch today?
So, I see that Theresa May tried to Bitch Slap the Idiot Jerk in the White House yesterday and he told her to... shut...up.  She should have realized that as long as he's hangin' with his homey Vlad she's about as inviting as a plate  of old, cold pasta.  Did she really think he cared?
Oh, and Mattie Lauer says he's... sorry, but then that's what most useless tools say.
And what about Garrison Keillor was fired as well... for inappropriate behavior, which just goes to show that just because you're pretentious as hell doesn't mean you're grabbing, and gripping and horn-dog tipping... or at least trying to.
And Jeffey Sessions is going to be called in for a private session... and I think it's today, and I'm sure it's not the kind of private session Roy Moore would like... no little girls.  Evidently, while speaking at a church rally, he said that all of those women accusing him are liars.  Someone needs to scrap up this pond scum and lay it out in the sun to dry.

The Grammy Nominations were announced a couple of days ago... who cares.  For those who don't know there are 84 categories (and there are sub-categories as well).  The nominations are chosen by a 'committee' which is why album sales and downloads are key to getting a nomination which defines these awards as being more about popularity than quality.  I don't watch them.
Yesterday morning I told the dogs that I was thinking of maybe putting up a Christmas Tree this year.  I couldn't tell if they were excited or not. 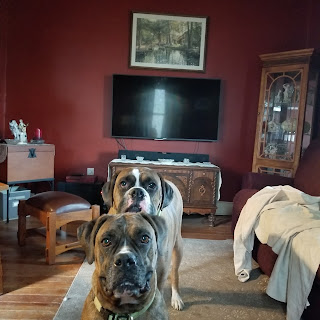 The only thing I'd really worry about would be Biggie lifting his leg and hosing it down in a big time way... the Republican Tax plan is going to hose most Americans, not that they really care.
Posted by Dave R at 8:40 AM