Well, it's Wednesday and my 3 day weekend is over - I get to go back to work today.
It's also November 1st, the first day I'm able to go into My Benefits page and cancel my insurance - Medicare, you know.  I didn't cancel everything though, I'm keeping my Dental Plan since for the price it's better than anything else I've seen.  Last year I paid $170 a month for all of my health care, but only because I jumped through hoops to get the Healthy Living Credit, otherwise it would have been $195.  The end result is that my paycheck will go up about $36 a month.
And isn't Faux News pulling out all the stops on the "Crooked Hillary" distraction?  Holy Shit!  Every other word out of their mouths seems to be "Crooked Hillary."  To be honest, that was always one of their pet phrases used to incite anger and hatred in their followers.  Now, however, those two words are tainted with the sickly, sweet stink of desperation especially since it appears that Mueller is looking into the Idiot Jerk's finances.  My feeling is that the Idiot Jerk is on the verge of shitting out hundreds of misshapen adobe bricks, more than enough to build his wall.  In fact, conservative desperation is approaching a fever pitch.  Remember, this is the party that always thinks they're going to rule the world... not on my shift.  When they look down they see their power slipping through their opened fingers.  I've even heard that Bannon is urging the Idiot Jerk in the White House to fire Mueller.  Those fools, don't they understand that would lead to riots?  Don't they understand that would the next best thing to entering a guilty plea?  Hell, no.  They are failing and they are desperate. (can I get a tee hee hee hear?).
Yesterday I was going through some drawers picking out stuff to throw away - I'd rather do it now rather than have someone else do it later - and I came across a picture of me wearing a pig costume.  Back when I was with the Pride Festival, we decided to have a Pig Roast as a fund raiser.  We rented a pig costume and wore it out to the bars to sell tickets.  Let me tell you, wearing a pig costume out to the bars on a Friday night takes really big cajones!  Now, since I've always been super critical of my looks, I don't have a lot of pictures of myself... and here I am... without facial hair... in a pig costume. 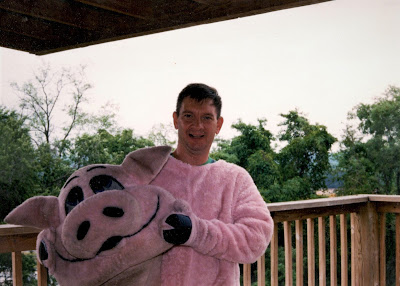