Some things are... Magic

Well, today is Tuesday and I go back to work tomorrow.  Yippee...  Yesterday my surgeon ran his forefinger up my incision and said "this is healing very nicely," and then he gave me a note saying I couldn't lift anything more than 10 lbs until 12/26, which is what I was expecting.  As I gave that note to the scheduler at the store she asked, sounding like an out of tune cowbell, "shall I put you on the schedule for the rest of the week?"  When I pulled out my phone and showed her she'd already had me scheduled for the next two she said "oh," clang, clang.
I also got a notice from Greenfield, my Mom's Senior Living Facility, informing me that on 2/1 her rate was going to be increasing by $800 per month.  They've added a 5 tier program of what they are calling Personal Care, however they don't provide any information as to what defines that care or what requirements need to be met to put one resident in one level as opposed to another.  Oh, and they also said heating costs have gone up 10% in the last year... that's bullshit.  There are over 100 residents at Greenfield, and if all of them have similar increases, that facility is growing its revenue by about $80,000 per month.  Right.  What will happen is that the residents will have to hit up Medicaid, which means Greenfield is making the Federal Government pay for their greed.
And I see that the Republitwats (now, isn't that catchy) are struggling with their selfish Tax Overhaul with at least 2 Senators saying they have issues - those are the ones who are speaking out publicly, I suspect there are more.  Oh, and they need to refund the government because the Idiot Jerk conspired with the Democrats to put that legislation off until December.   Those were some very smart Democrats, because now the Republitwat plate is simply overflowing with... shit, and that's not including the Roy Moore shit that's been slapping them silly - can you imagine the party of 'family values' even considering that pederast as a legitimate candidate?
Anyway, yesterday my Dr said I can start working out again - cardio mostly, until 12/26 at which point I can begin my strength training.  As a result I clambered on board my scales (yes, I have 2) this AM and let loose with the "shriek heard round the world!" well, maybe around my neighborhood.  Since my hernia was diagnosed I've gained 12 pounds.  Shit.  Later this morning I'm going to climb on board my elliptical for about 30 minutes of easy cardio... and then this after see if I can do about 30 more minutes on the bike.  I'll be using my new Senso Activbuds which work super well.  Sadly, they were delivered by a rather robust US Postal Worker rather than the gent in the ad. 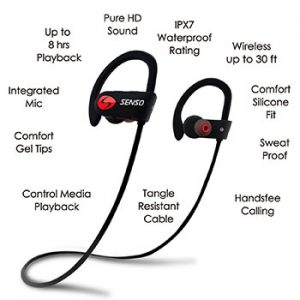 But, as I said, they work really well - Bluetooth, which means I'm no longer attached to the music source, almost like magic.