Well, here it is... Thursday and I get to go back to work for another 5 days.  I'm not excited.  Working is essential, not so much because of the money, rather we need to keep ourselves busy.  Doing nothing is boring as hell.  A long time ago, I went to a dentist in Hershey and I had the same dental assistant for years.  Two years before I changed dentists, she retired, and when I asked her what she planned on doing she said "sit on my porch and read."  That's it... nothing more. Shall we talk about what happens to muscles when you don't use them?  Or more important, your heart?  And though there are those who like to say that your brain is a muscle, it isn't, it's an organ, and sitting on a porch reading may keep it occupied, but it isn't making it work, it's not doing something it hasn't done for years and years and years.  Being occupied is not exercising, and while reading can be stimulating, I seriously suspect the books she preferred to read were not going to be much of a challenge.
I dropped my Cannondale X6 off at World Cup Ski and Cycle in order for them to do a little work on it while I'm surgically impaired, like get rid of the purple electrical tape I wrapped around the handle bars.  That's right, it was purple, the only thing I had on hand when the black tape started to unravel.  They're also going to put in a new tube in the front tire and fit it as closely as possible to where it should be as far as fitting me.
And looking at all of the political viewpoints out there that are Centrist, Independent, and Liberal... and even some Conservative ones, the common consensus is that had anyone other than Hillary run, the Idiot Jerk in the White House would have lost.  One year after that defeat, they are still pointing their fingers at each other.  This needs to stop now.  We need a unifying voice.  Bernie needs to fade into the shadows where he can quietly advise.  Hillary needs to do the same, not publish a book that's main intent is to validate her campaign.  Donna Brazile has a 'tell all' book coming out because she needs to point her finger too.  Anyone who had anything to do with that campaign needs to take their curtain call and get off the damn stage.  As a party, we need to move on.  We need a neutralizing, level headed person who can be come our spokesperson... now, because time is ticking.  We need someone to take the helm whom everybody can get behind.  There was a lot of dirt in that campaign, the kind of dirt we've come to expect from Republicans.  We are better than that. 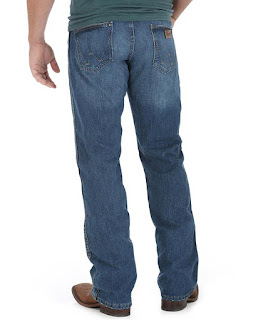 Finally, I ordered a pair of jeans from Amazon yesterday, Wranglers (sexy name), because I have a 29 inch inseam and the only jeans out there with that kind of inseam have boyish waistlines.  I'm getting another pair because one of the pairs I wear to work has a hole in the ass.  Now, if I was 25 years old that wouldn't bother me because back then my ass was shapely, not that's it's lost its shapeliness, it's just matured.  More importantly, I need to set a precedent at work.  No one wants to be thought of as the slutty old guy.