Baking with Biggie... and other things.

So, here it is, Thursday, and I get to take the bandage off of my surgical wound.  I slept without taking any of my meds, but took the Vicodin this AM because sitting down is a real bitch.  People think that stairs should be the problem, they're not, it's sitting down and then getting up - that's what hurts.  I'm also going to shave this AM - getting rid of that old, grizzled gray look.
And I saw that Jeffey Sessions testified again yesterday, which is a very good thing.  The more he presents himself in public, the more he obviously lies and obfuscates the truth, the more people begin to realize he is an evil, little man.  He will never understand just how terrible he is because that would require him to question his own feelings of superiority - and he does believe himself to be quite superior.  Roy Moore is the same way, so special in his own eyes he fails to recognize his own contemptability.  America sees, however.  These people are so lost in their own failed belief systems they will never understand what is good and what is right.  They are total failures as human beings.
Oh, and the big Idiot Jerk in the White House is evidently supposed to meet with a lot of the little Idiot Jerks in the House to talk about their tax overhaul.  These people are so desperate to pass some form of legislation they stink worse than a two bit whore,  and what they're going to attempt to foist on Americans is being described as a dumpster fire.  Do they care?  Absolutely not!  They keep telling themselves they know what they're talking about, that their fiscal policies are great, in spite of the fact that they've always failed.
Yesterday I also baked cookies, chocolate chip, from scratch... and I had help in the kitchen.  Big Seig. 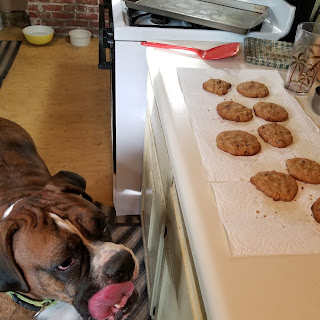 What he really wanted to be was the official taster.  As you can tell from the picture, he's pretty much counter high, and he kept licking his chops every time I pulled a batch from the oven.  Did he get one?  Nah, chocolate's not good for dogs.  He did get treated to a couple of Gravy Bone dog biscuits as a reward for not standing up at the counter and eating them all in one fell swoop.