Well, wasn't yesterday's news flash about Roy Moore so delectable, so deliciously and deviously wonderful?  I thought so.  That this fake paragon of Christian Virtues had lain naked with a 14 year old girl when he, himself, was 32 years of age, will ripen most people's indignation.  He says it never happened, my money says his mind thought it too trivial to remember.  I'm quite sure that because "Thou shalt not lie down with 14 year old girls" is not one of the 10 Commandments he would have had no problem with taking her hand and laying it upon his member.  Besides, in his mind 'all shall be forgiven,' without understanding just how far out on the crazy edge of Christianity he liked to sit.  In his mind, his devotion to his divinity has made him special.  Now he's going to find out just how special he is as his bad Karma whips his reality back and forth at lightening speed.
My Mom had called to wish me Happy Birthday which was surprising since she doesn't remember a lot these days.  We've all learned to let her calls go into our voicemail simply because a lot of times she just rambles on and on and on.  When I called her back to thank her, she'd already forgotten that she'd called.  And then she told me that my Dad was there (he died of lung cancer 12 years ago) and that I could come over and see him if I wanted to (I didn't go over).  She's already told my sister that most of the time she doesn't know if it's real or if she's dreaming.  This is how it goes.  She still knows who we are, but that will change in time.  This is how it goes.  Her reality is about as fractured as Roy Moore's, so much so, I wonder if he could be diagnosed as having Christian Dementia.
A while back I'd said I was looking for mirrors to hang in alcove in my dining room which used to hold a window seat, and that I thought the ones I'd seen were overpriced.  Well, the designer specialist in me has been working on that problem.  I'm making my own.  Here's the first one. 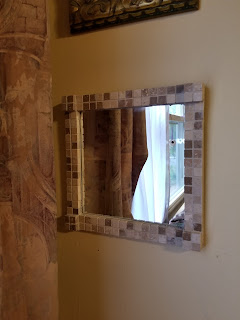 Part of a matching pair, the other hangs on the opposite wall of the alcove.  I have 2 more nearly ready to hang, different colored tile.  The total cost for all 4 will be about $80, which was the cost of just that looked halfway decent on Amazon.  Not bad, eh?
Posted by Dave R at 7:35 AM