So, I got a lot of exercise yesterday walking around my brother's new (old) farm:  the barn is... rustic, and the house has a wrap-a-around porch and large fireplace.  There are 2 tall walnut trees by the barn - walnuts are very healthy for you.  Oh, and I got to meet Wendy, the potbelly pig: 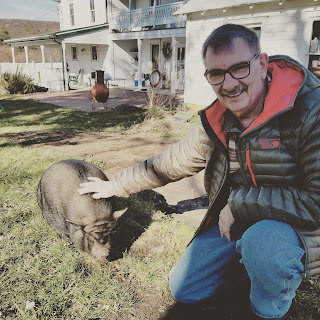 My nephew's dog Hudson took a liking to Wendy, not that she was flirting with him, but being a dog he didn't know that, and when he tried to get himself a little porcine pleasure she rebelled.  We all laughed as my nephew's wife separated the two... except for my sister-in-law, whose facial expression went from distraught... to despair... to horrified, which made the incident that much funnier.
My sister and brother-in-law brought my 84 year old Mom, Irene.  She has dementia and didn't remember many of the people around her; some found that a bit unsettling.  She doesn't care as long as people are catering to her and making her the belle of the ball.  I got a nice picture of 84 year old Irene holding 1 month old Irene, her great granddaughter. 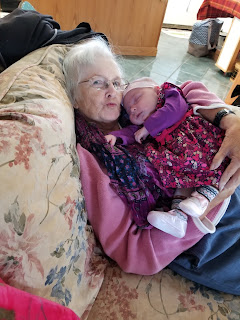 Later, after I'd gotten home, I boiled up some bones for the dogs (their Thanksgiving Treat) and ordered their Christmas toys (they get quite a few).
The only disappointment?  I put out a mousetrap last night and this AM discovered that the damn mice had eaten the peanut butter bait without the trap working:  I was left with mouse droppings and an empty trap.  My money says they're Republican.  This afternoon, after the Black Friday rush has passed, I will drive down to K-Mart and buy some new traps.  And just like the damn Republicans, I want the damn things out of the House as soon as possible.