Outrage in the UK!

I hope I wasn't the only one who realized that when the Idiot Jerk in the White House retweeted those Racist, Alt-Right videos the shit was going to hit the fan.  What was funny was that what I initially saw was a little, itsy, bitsy blurb which, after I clicked on it, seemed to explode across the Internet.  I mean, it went all over the world!  And only the Alt-Right was happy.  If I'm correct, there's a petition circulating in the UK to keep the Idiot Jerk from ever setting foot in the country again.  This fool is an ignoramus.  My money says that those retweets pretty much squatted down on his already terrible approval rating and dumped a steamy load.
Oh, and more joyous news for the Republicans!  They had to shelve the vote on the Senate version of their tax cut until today because... it was falling apart.  I understand it was short by 3 votes... deficit problems.  It seems as though in order for them to give tax cuts to corporations and the wealthy, they will need to eliminate benefits and raise taxes on those Red State people who need them the most... ahhh, now isn't that a shame.  But then this has always been a hurdle they can never get over, ever since they days of Ronald Reagan, where Trickle Down Economics ended up pissing on the lower and middle classes.
And what about Rex Tillerson leaving?  Word of this happening has been floating around for months... and he's being replaced by Mike Pompeo, a man who thinks like the Idiot Jerk in the White House.  This Fools Parade is just getting crazier and crazier - and is definitely not the way you win support or grow your shrinking base. 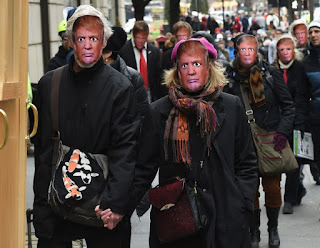 As for the Outrage in the UK, word is going around that a planned trip there by the Idiot Jerk has been put on hold - they say he was supposed to open a new US Embassy - until some future date.  And chance he had of meeting the Queen when he does go, if he goes, has pretty much been flushed down the shitter.  I'm sure his Administration is trying to provide him some solace for this loss by arranging for a quickie with his Bromo pal Vlad.