Here it is... Sunday, the first of 2 days off, and I slept in... kind of.  The dogs don't know I don't have to go to work today, that my schedule has changed, and so they woke me up at the same time they always do to go 'potty outside.'  Why would they know any different?  They're dogs.  Of course that didn't stop me from going back to bed for another 2 hours.  I need the rest, I've lots of things to get done today.
Grocery shopping is one of the things that needs to be done.  I'm going to try my hand at homemade burritos this afternoon, so I'm going to need to get some beans, everything else is pretty much stocked.  I'm going to use Crisco rather than lard to make the tortillas, not that I have problems with lard, it's just that there's going to be enough fat in each one as it is, I don't need to add anymore.
I want to see if I can get a 45 minute ride on the trainer.  Shouldn't be a problem (I hope) as long as I get the right music.  Or maybe a video - I don't do movies, but I have a number of cycling videos from back before my schedule had to be fully flexible.  I even have Sufferfest videos. 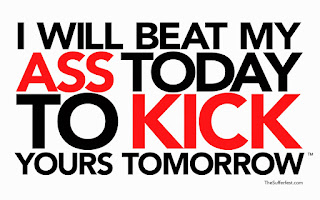 Now, I know there are those out there who are going to see this and think it has nothing to do with cycling... well, it does.  Sufferfest has been around for a long, time.  In fact, they are one of the best purveyors of cycling videos.  Their Tour of Sufferlandria is simply amazing!  The only thing you don't have to worry about when using one of their videos is crashing unless you're using one of these trainers:

And I do know the Idiot Jerk in the White House farted out some noise yesterday down in Mississippi while protests are continuing to grow in the Middle East.  Clueless.  Even though there is great doubt that he's a Believer, his administration is the most effective example of why our Founding Fathers separated  church and state.  The faithful are totally oblivious because they don't care about anybody else.  They are a selfish group of breeders, aren't they?