Woke this AM to find that Central PA is getting some snow - the forecast was for 1 - 2 inches, but we have about that much already, so we will probably getting 3 or 4 - which is fine with me.  While not for everyone, shoveling snow is 'free cardio' take advantage of it, unless you're out of shape, than shovel slowly. 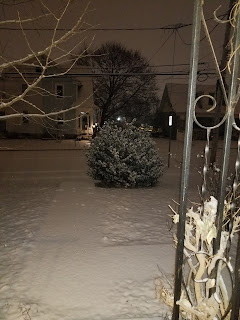 The dogs have been out at least 4 times playing in it so the pristine whiteness is now splayed with footprints and pee marks.
I went to see "Jumanji" last evening - some of it was very good, some of it was... well, okay.  A good word to describe it would be... uneven.  For those who don't know, this is the story of 4 very different teens who get sucked into a video game where they need to learn to work as a team in order to survive.  Unfortunately that only happens with two of them.  Dwayne Johnson's size makes him a screen presence, however there's little chemistry between he and Karen Gillan, who seems to have been terribly miscast.  Kevin Hart is funny, but doesn't seem to realize he's not the star.  Jack Black, however, is hysterical as Bethany, the self-absorbed, Miss Popularity, who finds herself in the body of a middle aged chubby man.  In fact, Jack Black and Nick Jonas are the only two characters in this film who develop any kind of chemistry, and are really the only reasons why you might want to see this in the theater.

That's right, you Nick Jonas fans, he turns up almost 2/3 of the way through and keeps it from becoming totally maudlin.
Plans for the day include making butternut squash soup from scratch, shoveling some snow, and putting in some time on the new bike.  Oh, and maybe a nap or two.