So, while I've been playing Destiny 2 (it's fun, but not great) the real blockbusters come out today, or last night if you chose to download them.  I ordered a hard copy of Assassin's Creed - Origins, but downloaded Wolfenstein II, The New Colossus.
And I was excited.  Not like a little kid at Christmas, but still, these are 2 of my favorite game franchises.  Around 0330, when the dogs woke me up to take them outside (yes sometimes they have to go out in the wee hours of the morning) I started downloading.  And then I let them in and went back to bed.... for an hour before I finally said enough is enough.
After an intro / prologue, we find BJ Blazkowicz recovering from surgery in a submarine that has been attacked by Frau Engle and her Nazis... and BJ goes to killing them, while in a wheelchair.

Eventually he does put on clothes. 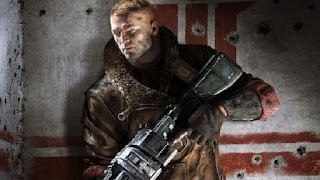 Anyway, I'll probably wait to play Assassin's Creed -Origins, or at least start to play it until Monday or Tuesday - I have off those 2 days.
I saw where the Idiot Jerk signed something that says there's an opiod crisis in the United States, but that's about as far as he went.  He also said the government would release all of the Kennedy assassination info... and then didn't.  And new info about his campaign going to Wikileaks for emails has surfaced.
Oh, and a lot of people are pointing out that if McCain, and Corker, and Flake really wanted to do damage to the Idiot Jerk they'd become Democrats.  We know they're never going to do that, they'd look like traitors to their own constituents, so instead they're going to dance around like a trio of nancing nellies blowing nothing but smoke.  Like so many, many Republicans, they seem to lack backbones... where's BJ when you need him?