Bladerunner 2049, the Idiot Jerk, an the evil bitch

Well, it's 0620, the temperature outside is 76 (F) and it's drizzling - the normal temperature for this time of year is supposed to be in the mid - 60's... and my Central Air is running.  What's wrong with this picture?
Today is Columbus Day and I have off - the 3rd of my three days.
I went to see "Bladerunner 2049" yesterday.  My niece's husband posted on Facebook that it was a 'Masterpiece,' so I corrected him.  The movie is good... but not great.  The acting is all very good, some of the performances will most likely be recognized come Oscar time.  Visually stunning at times, "Bladerunner 2049" is certifiable eye candy.  But then there's the story line which takes almost 2 hours and 45 minutes to unfold.  The first film, all those years ago, was fast paced - remember Harrison Ford chasing Joanna Cassidy through the shops and crashing through the glass?  There is action here, but nothing at that pace.  What I noticed was a lot of variation, or re-imaginings of scenes:  Deckard and Leon Kowalski is now Gosling and Bautista.  Questions Deckard asks in the first film are realized in the sequel:  "You look down and see a bee crawling on your hand, what do you do?"  I thought it was good, but not great.  I wasn't bored, didn't find the movie dragging, however my friend Patty said she thought it dragged on and on at times. 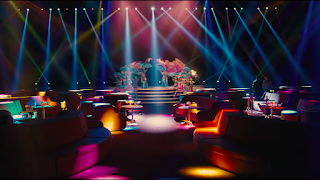 Politically speaking, yesterday was another banner day of stupidity for the Idiot Jerk in the White House, in fact, there was more fun there then a three ring circus.  The feud between Corker and the Idiot Jerk is beginning to really tear the GOP apart.  The Idiot Jerk will support a weakened DACA, but only if he gets 10 billion for his wall.  The Mini Idiot Jerk (Mike Pence) walked out of an NFL game because "his boss gave him walking orders.  Steve Bannon is only going to back Conservative candidates running against the GOP.  Oh, and there's some grousing among the GOP that the 'Middle Class Tax Cut' is going to be fairly non-existent.  Did I miss anything?
And finally, I Googled the ACLU vs Cornwall Lebanon School District and came up with bit about the evil Mrs. Miller.  Evidently she forced a 2nd grader to stand in front of the class and recite the Lord's Prayer because when he'd done it at his chair, he recited it with his eyes open.

Lebanon Daily News 6/25/64     Mrs. J. Herbert Miller, Eric's homeroom teacher, explained the incident when she appeared as a witness before Judge Follmer. She said Eric was one of three pupils called upon to recite the prayer with closed eyes. Her attention to the eyes- open incident was called by the other pupils, Mrs. Miller testified. She further pointed out that she was merely carrying out a routine instructional function by requiring that an act improperly done be performed again in the correct manner.
Posted by Dave R at 7:40 AM