So, it's Saturday and I get to work... of course I'm going to have 3 days off in a row starting tomorrow which is a good thing.
Monday I'm going to go down to York - my friend Betsy needs to buy a new car, and I'm going to try and keep her from making a mistake, that being choosing one which is too old just because it's cheap.  She did that 12 years ago and has been paying for it in repairs ever since.  When you ask her how much she's spent she'll tell you thousands and thousands of dollars.  If you ask her why she bought that old, cheap car she'll tell you "because I couldn't afford car payments."  Right.
Evidently their are sealed charges charges in the Russian collusion probe being directed by Mueller.  I'll bet that's making the Idiot Jerk's head spin.  Wouldn't be surprised if he doesn't start paying someone else's legal bills.
Oh, and I found this interesting.  A teeny, weeny power company from Ryan Zinke's teeny weeny home town got a really big contract to help Puerto Rico rebuild their electrical infrastructure.  Funny, eh?  So funny both parties are calling for an investigation.  Even funnier is that this 2 year old company only had 2 employees prior to getting that really, really big contract.  I'm surprised we didn't get a Tweet from the Idiot Jerk praising Zinke for "finally putting some of those bad hombres to work."  Wouldn't we all get a charge to see little Zinke's head rolling because of his greed? 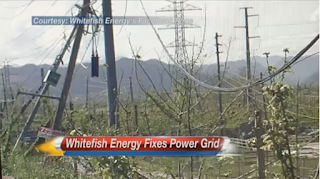 Oh, and just remember, the American Taxpayers are going to be footing the majority of this bill.
Yesterday at work, I was walking backward helping a fellow associate carry a roll of vinyl when I tripped and fell backwards, landing on my butt.  Even though I felt fine, I reported it anyway, which is what we're supposed to do, you know, they're always worried about liabilities.  As I was telling some friends about it later, noting that I hadn't hurt myself, one of them piped in "of course you did, you have a crack in your ass..."
Posted by Dave R at 8:29 AM