So, here it is, Thursday, my 2nd day off in a row (ain't it sweet?).
Yesterday I drove down to the VA Hospital in Lebanon and met with the Admitting Nurse and the chief Anesthesiologist (not the one who's going to put me under).  Mostly they told me things I'd already been told... except for one thing.  I can start going back to the gym now - I just can't do anything Ab related, which means that the 160 lb leg presses are out until sometime in December; upper chest and shoulders are fine.
Since those meetings were supposed to take an hour and ended up taking... oh, about 10 minutes, I took a jaunty trip out to Coleman's Park, (it was also on my way home to Harrisburg).  55 years ago I lived in a suburb of Lebanon called Avon (pronounced Ave - in ((short 'a'))) and every Wednesday during summer a break I would climb aboard a big, yellow school but at the Avon (short 'a' remember?) playground and ride out to Coleman's Park were I'd swim in the Gingrich Memorial Pool.  That swimming pool is still in operation today, which I found surprising.  This is what it looks like today. 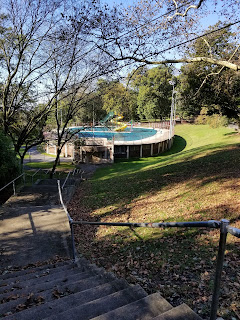 Back then they had a diving board rather than a sleek, yellow slide.
On the Idiot Jerk side of things in this world, either he was or wasn't ignorant to the grieving widow of an American soldier killed in Niger.  Just by knowing that the first name of that American hero was LaDavid, I'd pretty much bet the claims of callousness are correct.  Except for his rabid supporters who are dumber than cow shit, everybody knows by now that the Idiot Jerk prefers to deal with, and associate with, homo sapiens who are Caucasian.  In fact I'd bet good money he would so much as wet his little toe in the Gingrich Memorial Pool since those kids swimming there are quite diverse.