A long time ago, back when I was in Navy "A" school studying to be a Radarman, I was sitting in a friend's room one day when a song came on the radio.  Much longer than your usual songs, I liked the guitar and the lyric and... well, I was impressed.  I asked what it was and he said "oh, that's Roundabout by Yes.  That Christmas, when I was home on leave, my Dad took me out shopping for a gift my brother could give me.  We walked into a Wee Three Records, and the first album I saw seemed to jump out and grab me for the simplicity of it's jacket.  My Dad bought it and my brother, not knowing who the group was, gave me one of my best Christmas gifts ever... a little thing called 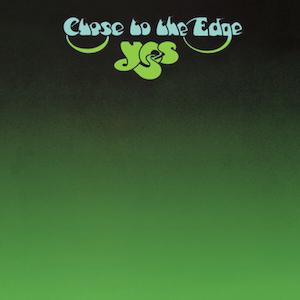 I still own that album, with its green, paper inner sleeve with the song lyrics.
The first time I saw Yes in concert was at the San Diego Sports Arena on their Tales from Topographic Oceans Tour.  There was a warm-up act, whom I don't remember.  After they finished playing the stage crewed moved some things around.  And then something odd happened.  Music began to play.  Not any music.  Classical music.  Stravinsky's Firebird Suite.  As the music got louder and and louder, the lights began to dim and people got very, very quiet, and then the lights seemed to explode as Jon Anderson stepped to the front of the stage singing:

Yesterday I saw that Yes is going to be inducted into the Rock and Roll Hall of Fame in 2017 and it almost brought tears to my eyes.  I've seen them numerous times in concert and think they are most deserving.  They are spectacular in concert. They are great.  They are... Yes. 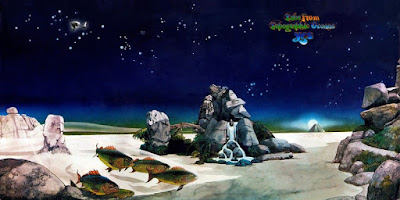 Email ThisBlogThis!Share to TwitterShare to FacebookShare to Pinterest
Labels: Close to the Edge, Rock and Roll Hall of Fame, Yes