So, yesterday was busy for me but then it was a day off work and I'm not one to slack around, though sometimes I would really love to.  First thing, at 0720 was my Ophthalmologist appointment.  The Travatan Z drops work, my eye pressure is down, now ain't that great?  Well, maybe not.  You see my insurance says they're too expensive, oh, and if you're wondering, I have Anthem Blue Cross.  They also want to know why a less expensive drop wasn't tried first, and I can understand that.  If they ask, I'll tell them why.  Originally I was going to get a different test / sample drop, however, when the assistant opened the storage drawer none were to be found.  All gone.  So instead I was given the more expensive Travatan Z.  My friend Patty, who works in insurance says this is an "old trick," running out of older, less expensive drugs in order to prescribe newer drugs which, while being more effective, are also more expensive.  How expensive are these drops?  $165 for a 2.5 ml bottle.  That's smaller than my thumb, and I have teeny, weenie hands. 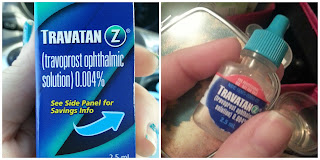 Anyway, while the Ophthalmologist and the insurance company battle it out, I called the Veteran's Administration.  Veteran's Insurance.  They're a little slow sometimes, but they're the way to go if you want a new drug.  $8 a month copay, that's it.  I'm so lucky to have this 2nd option.  Most people would end up getting screwed over.