Cluster bombs are terrible things.  They destroy over a wide, wide area.  Sitting here watching the DT cabinet form is a lot like watching the assembly of a cluster bomb.  You've got Sessions from Alabama who's a white racist hate bomb.  There's Betsy DeVos who's an Idiot hate bomb (I've read her agenda will be dead on arrival).  And what about Tom Price who's planning on blowing up healthcare?  Don't forget Ben Carson (who's no doubt planning on Pyramids in Kansas for grain storage).  We have Scott Pruitt (who really seems to like scorched earth policies).  We've got Mnuchin and Ross....  I believe they made most of their money on the great recession, bleeding the debt of others for all it was worth.  All of these people, a lot of whom are billionaires, don't have an inkling of what makes the average man tick.  Yet millions of average men and women voted for the DT because he told them what they wanted to hear.  They have yet to comprehend we are watching a cluster bomb being assembled.  And when the explosions start a lot of people are going to be hurt. 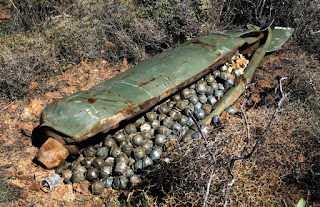 But that's okay with conservatives because DT is a Republican...  Those voters don't seem to understand that their party wants to blowup Social Security, that they want to dynamite Medicare.  There are a lot of people who voted for DT because they believe the Republican House and Senate can control him... Wait a minute... I'm laughing too hard at that joke.
Of course I might be wrong, you see.  There may be no cataclysmic explosion destroying millions of lives.  Nope.  What we may actually be watching is one of your good, old fashioned, cluster fucks.  In fact, I wouldn't be too surprised if behind the scenes they already got out their little knives and are beginning to stick and jab.  You see, there are many types of clusters, and you can bet that DT will be Tweeting every gory detail.
Oh, and by the way, I understand they're having problems getting entertainment for the Inauguration.  I don't know why they just don't get Scott Baio to do impressions.