An old Navy buddy of mine was all ecstatic about Trump's Carrier deal...  "all of those jobs he save!"  When I pointed out that all of the details hadn't been made public he replied, "But you take that $7 million tax break and divide it by all those people keeping their jobs."  He ignored the fact that even that horse's ass Sarah Palin said Trump was starting to waltz down the path of Capital Cronyism.  All he could see were the jobs... nothing else.  I evidently went to far when I said that this was a clear cut case of fluffing and nothing more. There was no response.  But, this is the truth.  This whole episode was designed to make Donald look good for the camera, nothing more.  This is nothing more than political porn.
Get read, there's going to be a lot of it.  He is ready for his close-up, Mr. DeMille.  Prepare for the propaganda.  His ego will need to be stroked and teased daily; gently cupped and caressed for public consumption.  And the more things fall apart, and believe me, that will start shortly, the more theatrical these events will become. 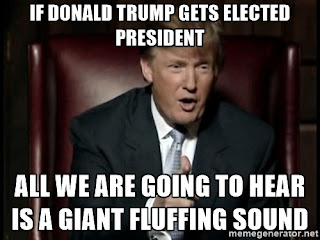 To be quite honest, I would not be surprised if he and his team don't come up with a Reality Show called Mr. President in order for his loyal Trumplodites to hear him say things like "you are bad," and "I am good," and "I am making American great."  Things you will never hear him say are "your Carrier air conditioner is going up in price," or "we will now be heating all of our Federal buildings with Carrier furnaces."  But that's okay, isn't it?  At least he'll be looking good.