Just a couple of notes before I head off to handle all of the day after Christmas Returns - and there will be tons, returning that chain saw which is either too big or too small (just like sweaters), or the compact driver because they just happened to get 2 others....
Anyway, I thought it amusing one of the individuals named as part of DT's Communication Team is stepping down already.  Jason Miller.  I mean, hey, he just got the job, didn't he?  In case you're wondering, he's the one who tried to put out the fire a week or so ago when DT said something stupid about the Arms Race being a good thing.  And of course it probably would be for certain people: nuclear weapon makers.  Then, just before Christmas, Mr. Miller said he was leaving DT's team to "spend more time with his family....."
Now, I don't know about you, but "spending more time with the family" was always code for "you're fired."  It's a prettified way of saying the same thing. 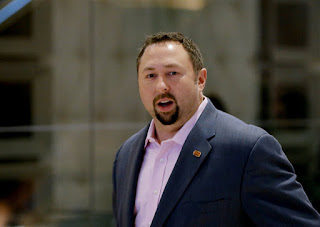 So there's a good possibility Jason got canned... Or maybe he got smart.  Maybe the nuclear bit gave him an idea just who horribly difficult working with DT is going to be, constantly turning the turds that fall out of his mouth into something more palatable... like rice cakes.