The Truth about the Bony Penis

You know I read a lot of stuff, some of which might rot my mind if I take it too seriously.  This morning, sitting here with my coffee, I chanced upon an article about the baculum.  This is the bone a lot of mammalian males have in their penis.  Humans don't have one, even though some men seem to think they do.  Here's the article, and it's based on research headed by someone named Brindle who doesn't have her doctorate, but seems to be aiming her thesis at penis bones.  She believes that as we became more monogamous there was no longer a need for a penis bone, and so it devolved.  Personally, I think the article reads more like a subtle article favoring one man, one woman marriage rather than about sexual behavior; men don't have a bony penis because they no longer try to bone anything and everything that walks in front of them.  Evidently she has never heard Trump's pussy tape.  Or, perhaps, she just isn't identifying strong enough from the male perspective.  And then there's this article which does tend to question the hypothesis, that monogamy might have less to do with this disappearance, that the baculum has disappeared in human males because there's no longer a need to tickle eggs into the uterus. 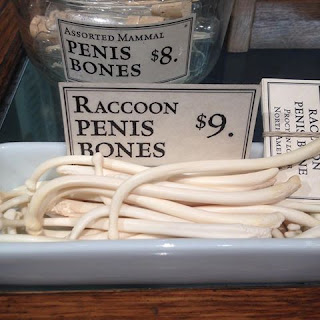 For some reason, I found this a rather interesting subject and so perused quite a number of articles, most of which were written by women, and I wondered why so many would find this topic so consuming.  I know there are a number of men who would rather have something of more permanence, of course that would be the ruination of certain drug companies.  I do believe there are already implantable devices on the market.  Perhaps they should take a clue from the Eskimos who already know how to decorate a baculum.

My, doesn't this look like something a Republican would want.