He's down by the bow

You don't have to look far to find out how most American's feel about DT, in fact, his low approval approval ratings no doubt are giving him that sinking feeling.  Now, I'm sure his transition team is saying things like "don't worry, this will get better," and "just keep slugging away, we'll hit the top."  Right.  And his bizarre doctor gave a very... odd interview.  Every time he see things like this he want to take a big step backward.  Cori, who works at the paint desk and who's brother is a Trumplodite, says the word going around is that DT is terrified of being assassinated, which may be why his appearances are so short and infrequent.  Didn't anybody tell him that goes with the job in a big time way?
I talk about Karma a lot, the fixing of mistakes, well, for DT this is Karma. A man who needs to have his ego stroked regularly steps into a position where half of the country already hates him.  No stroking going on there.  Winning the presidency was the worst thing that could happen to him.  Big chunks are about to be gouged out of his ego.  Good for him.  I do not doubt that he will go down in history as the "do nothing president," because everything he does that is unpopular with the public will be another sliver out of soul.
And the Republican Party?  They're all on the same boat.  All of their little, pet projects like rewriting the rules of Social Security, slashing Medicare, even gutting Obamacare?  They will fail the minute public approval starts to go south.  They now have a president who needs to be petted, and who wants to go down in the history books as being good, and being popular.  They would have been in a far better position had Hillary won, now they're going to be pretty much shackled by public opinion.  They have a Star who wants to sparkle, not piss people off. 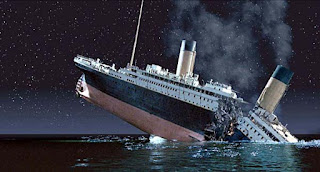 And as for DT?  This is his Karma.  He now has to deal with the fact that not everybody likes him.  People really do hate him.  There are now people out there who now pray daily that something terrible happens to him, that he dies.  They chant "He's not my president!"  And he no doubt daily prays that history doesn't prove him to be the worst president in American History.  He is down by the bow and it ain't going to get any better.
Posted by Dave R at 7:53 AM