The Prostitution of Billy Barr

I find it hard to believe today is Friday, but then my calendar is fairly nonexistent normally; it's either a work day or it isn't.  Tomorrow I get to go to work.
Yesterday was a day of accomplishment with a number of chores being tied up with a nice 'finished' ribbon and set aside until I unwrap them again in a week or so.  There was more planting of the seeds (basis and spearmint) and a good hearty wacking of the weeds.  Today I plan on picking up sticks and moving my paint storage down into the basement.
I rode for over 16 miles in Corsica yesterday.  The total route is almost 20 miles long with lots of hills and one of these days I will finish it. Today I'd like to get another 14 or 15 miles under my belt.  The temps are supposed to get up into the mid 80's (F).  This means one of the fans in the cycling / computer room will need to be on to keep me from baking.
And, speaking of baking, I made a personal pan pizza for dinner last evening. 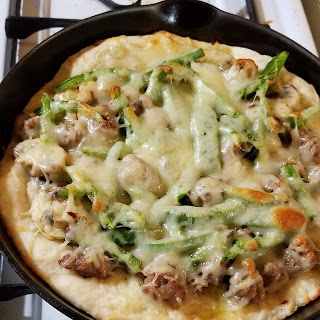 It was delish... and no, I didn't eat the entire pizza at one sitting.
Tensions are beginning to rise in Texas where the Republican governor is planning on dropping more restrictions in spite of the fact that the infection rate is increasing daily.  This was expected.
The Idiot Jerk was in Allentown yesterday preaching to his slowly devolving base.  Of course, there was a protest in Harrisburg, damn how this man does love his insurrection.  A major majority of Americans want the reopening to go slowly.  The Idiot Jerk wants to shove it down our throats, but then he has no respect for human life, no respect for values, and complete disdain for ethics, but then he's a Republican.
And how about Mitch McConnell admitting he lied about the Obama administration not leaving a pandemic plan.  Then he goes on to say he doesn't know if it was followed or not, he 'was not part of that process.'  That's going to be used against him this November.

Biden had one of his internet town halls yesterday.  He's getting rather forceful in his attacks on the Idiot Jerk and this administration.  He hit that nail on the head when he talked about the prostitution of the Justice Department.   Actually, prostitution might be the wrong word.  I doubt very much if Billy Barr needs to be paid every time he throws his legs up in the air.