It's Monday and I have the day off.  Then I'm scheduled to work for 5 days in a row, 8 hours a day, 40 hours altogether.  Getting back to a normal life will be interesting.  Three weeks later they have me back to my 8 - 1 schedule, and the following week I believe I scheduled some vacation time for myself.
Yesterday one of my fellow associates called off so I was by myself until the closing associate showed up at 1:30 PM.  I was busy.  No wackos.  No assholes.  Time when very fast.
I was talking to my friend Betsy last evening and I asked her who Lara Tramp was, I mean I knew she was a Tramp by marriage but I didn't know if she was one of those Tramps who was married, and then divorced but still considered herself a Tamp.  Not that it makes a wit of difference, once a Tramp always a Tramp. I saw where she was being supportive of Tara Reade, who is also a tramp but not by marriage... yet.  I do not doubt Tara has aspirations to be an Upper Class Tramp.
During our discussion, I pointed out that in regard to Covid - 19 and couples, married or otherwise, when one is infected it's almost a sure thing their partner, spouse, or what ever... roomie even, ends up getting infected as well.  Viruses like when you sleep together, you know?  Don't you fine it interesting that Stevie Miller's pretty new wife shows symptoms and test positive and little Stevie doesn't?  I do.  Of course, one can not help but think about the Idiot Jerk's poor valet, a strapping sailor-man he doesn't know, who also tested positive a few days earlier...  Hhhmm.  And they're the only 2 with symptoms who have tested positive in the West Wing.  Could Stevie's marriage be one of... convenience?  I, for one, would not be surprised if he was far more interested in his little Nazi boys.
And I have baby peaches! 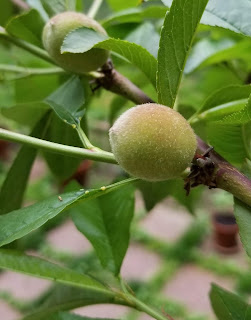 And baby nectarines, as well.  My cucumber seeds have sprouted as well.  Yum.  And tomatoes, too.
Posted by Dave R at 6:40 AM