Well, today is Tuesday and I'm working my 7th day in this schedule.  I have off tomorrow and Thursday, yippee... oh, wait, the forecast for tomorrow is for on and off again rain, with a high of 50 (F).  I might have to do something like a really long bike ride since I'm not going to be able to do anything much outside.
I did sign a customer up for a measure yesterday.  She and her husband had just closed on a new townhouse, and, of course, she asked "how soon can we have this installed?  By the end of the month?"  I told her that was a good time frame.  Guarantee nothing.  One of my fellow sales specialists set up a measure over the phone and did just that; there are going to be problems with that job.
In case you hadn't realized it yet, this little Covid - 19 is going to be with us for a while.  I think back on that supposed 'medic' who got angry and scolded me "this is going to be gone by the 18th."  I suspect he go that from the Idiot Jerk in the White House, a less than human individual who has no regard for human life.  This is evidenced by the casualty predictions, which once again beginning to rise as is shown in this document.  Remember when the CDC was predicting  we were going to lose 60,000 lives?  Well, they've up'd their prediction, in case you didn't know.  Now they're saying 100,000 by June 1 with almost 3000 more a day.  Do the math and you'll see they're low-balling that number.
Why, you ask?  Conservatives want to ease restrictions and get people back to work in a very unsafe environment.  It's about the buckos in the bank, you know?  This is the Republican version of Clinton's "it's the economy, stupid," except they're going to kill people.  And they're going to lose a lot of votes along the way.  Those very people who love the Idiot Jerk in the White House are running around without masks, they're not practicing safe distancing, and he's encouraging their behavior. He doesn't care if they live or die, as long as they go back to work.  What neither he nor they understand is that a vast majority of the country would rather focus on health and safety rather than dollars and cents.  We all know the economy is going to come back... it always has, the recovery is just not going to be as fast as he and they want it to be.  Tough Shit.
And... finally... yesterday as I was heading to my car I saw something amazing.  Glen is blooming!  And it looks like he... she... it is wearing a little green hat! 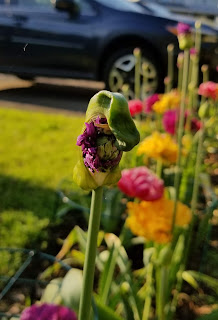 I never, ever thought Glen was going to put on such a show!